Hannah Main-van der Kamp has published three books in The St. Thomas Poetry Series: With Averted Vision (2000), According to Loon Bay (2004,) and Slow Sunday on the Malaspina Strait (2012). She also appears in both anthologies published by the series, Poetry and Spiritual Practice: Selections from Contemporary Canadian Poets (2002) and Poetry as Liturgy: An Anthology by Canadian Poets (2007).

PRAISE for the poetry of Hannah Main-van der Kamp

“It is as though her voice has learned the forms of devotion from liturgy and finds the same devotion repeated in the natural world. She retreats for contemplation not to the abbey but to the outdoors, chronicling what she finds there with a patience that brings to mind medieval monks carefully transcribing sacred texts, her voice precise as calligraphy.” (Sonnet L’Abbe in Books in Review)

Of With Averted Vision (2000): “The poet lovingly describes anthropomorphic birds, luscious fruits, frost, rain and snow, exotic scenes from Spain, and the ‘Birkenstock Benedictines’ from Mission, B. C., all with evocative detail, fresh metaphors, and gentle humour . . . Throughout the book, “Soul” derides the dualistic dichotomy of penitential, persevering ‘Spirit’ and self-indulgent, sloppy ‘Body.’ Rather, Soul is ‘absorbed in her own vocation’: spiritual meditation, ‘the discipline of presence’ that waits on the numinous to manifest itself ‘at the edge of vision.’” (Barbara Pell in Journal of Canadian Poetry) 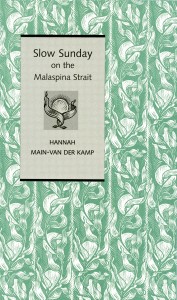 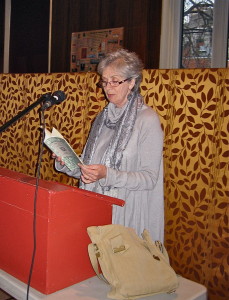 Slow Sunday on the Malaspina Strait was launched at St. Thomas’s Church on 25 April 2012.