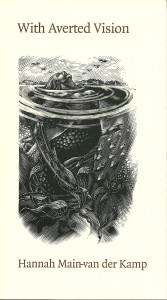 Hannah Main-van der Kamp was born in the Netherlands and came to Canada as a girl. She worked as a special education teacher and administrator. She now lives near Powell River, British Columbia.

“The poems sparkle with wit . . . the language is sonically dense, figuratively rich, and admirable clear in conveying meaning . . . This book is a good one.” (Eric Trethewey, Canadian Literature).

“a beautiful tribute to the soul that resides in each one of us, whether or not we are aware of its existence” (Susan McKnight, CBRA).

Jeffery Donaldson (University of Toronto Quarterly, “Letters in Canada,” 2000) notes how the “quick, journal-like observations match the darting movements of the birds and the peripatetic Soul flitting through the garden.”

Barbara Pell  (Journal of Canadian Poetry) comments on the “evocative detail, fresh metaphors, and gentle humour” in these poems.

“This volume is a beautiful work, both in toto and individually as the poems stand alone. It is mercurially and lushly beautiful. The poems enter one at levels quite beyond the intrusiveness of speech . . . I thrill to these poems and will treasure them” (Tharin Williamson, Christianity and Literature).

Hannah also contributed to Poetry and Spiritual Practice (2002), Poetry as Liturgy (2007), and Poems for an Anniversary (2013). Her two other collections in this series are still in print: According to Loon Bay (2004) and Slow Sunday on the Malaspina Strait (2012).