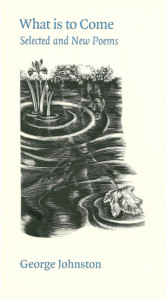 George Johnston (1913-2004) was born in Hamilton, Ontario. After serving in the RCAF during World War 2, he studied at the University of Toronto and then taught at Carleton until his retirement in 1979. In addition to his translations from old Norse, he published nine volumes of poetry, including Endeared by Dark: The Collected Poems (The Porcupine’s Quill, 1990).

“What is to Come feels like a poetic farewell. Never one top promote himself in any way, Johnston has at the same time eschewed the image of the solitary genius. His poems are full of a sense of his affinity with the social . . . Johnston is one of our great elegiac poets, perhaps because of his paradoxical ability to convey depth of feeling through lightness of rhythm and tone” (Cynthia Messenger, Essays on Canadian Writing).

“there are moments in What is to Come that remind readers of the fine ironies and penetratingly reflexive glances that have always animated the strongest of Johnston’s poems” (Klay Dyer, Journal of Canadian Poetry).