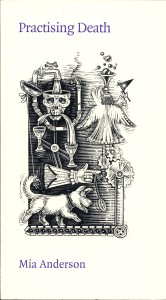 Born and raised in Toronto, where she graduated in English Lang and Lit (and later took an M.A.) from the University of Toronto, Mia Anderson spent the next 25 or 30 years on the stage, in London, England (‘Theatre of Cruelty’ with Peter Brooks), repertory (Traverse Theatre, Edinburgh; Manchester rep, Regent’s Park etc), and across Canada, with 5 seasons at the Stratford Festival, rep in Winnipeg, Fredericton, Montreal and so on, and a national tour of her one-woman show 10 Women, 2 Men and a Moose, based on the body of then recent Canadian literature written mainly by women. There was also the heyday of radio drama at the CBC, and television work including her many voice-overs for television, one of which became the recording of Atwood’s The Journals of Suzanna Moodie.

Anderson had just launched her second one-woman show, Writ Large (instigated by the Fredericton Writers’ Workshop where she was teaching poetry), it too based on recent Canadian writing, when she had a classic ‘call’ to ordained ministry and returned to Trinity College in the Toronto School of Theology, receiving her M.Div in 2000 and being appointed to the Anglican parish of St Michael’s in Québec City. She has now retreated to the shores of the St-Lawrence outside the Québec capital with her husband, philosopher Tom Settle.

She began publishing in earnest in the 1980s, her first book, Appetite, coming out with Brick Books in 1988. Her second, Château Puits ’81 (based on a year in France) was with Oolichan Books in 1992, the year she also won the National Magazine Award Gold for poetry, with ‘from The Shambles’—a text which (though still not in book form) reflects on her many years as a shepherd. Her third, Practising Death, was published in 1997 by The St Thomas Poetry Series.

‘From The Shambles’ had won the Malahat Long Poem prize earlier in 1992, and ‘The Saugeen Sonata’ (in the book Appetite) had won the same prize in 1988.

The Sunrise Liturgy, published in September 2012 by Wipf and Stock Publishers, is not surprisingly the most theological of her books, joining in a long tradition within the Anglican Church of poet-priests. It is also, as noted by one of its endorsers, in the lineage of Traherne and what one might call the nature mystics.

“Practising Death has an even longer tradition, of course, involving a form of Christian witnessing in the authentic sense of that word, a detailed presentation of thoughts as well as feelings, as precise as possible, and free equally of posturing and self-justification. A good combination for good poetry.” (Allan Brown)

“Mia Anderson’s third book is a challenging read, both for its style and its content. All of the poems are written in three-line verses that march in measured metrics down the page. There’s a hymnal quality to them, cadences that catch on the broken line like breath caught at the sudden visitation of the divine . . . For Anderson, Christian theology is the answer to the despair that comes with the recognition that all life finishes with death” (Betsy Struthers, Arc).

“Practising Death is marked by verbal precision and homespun wisdom. Some poems display the ironic edge of Stevie Smith without the irreverent and acerbic tone” (Dominic Manganiello, Journal of Canadian Poetry).

Mia also contributed to Anniversary Poems (2013) and launched Into This Holy Estate (Wipf and Stock, 2015) at St. Thomas’s.