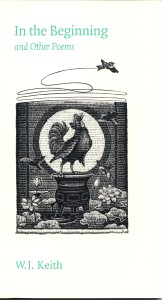 Born and educated in England, W. J. Keith taught English at University College, University of Toronto, for many years. He acted as editor of University of Toronto Quarterly and was the author of many authoritative studies of Canadian literature. He published three volumes of poetry and, together with his wife Hiroko, was an avid birder. He died in 2018.

“Keith’s power lies in his willingness to tolerate paradox, contradiction, confusion, and a lack of resolution, in the foundation of faith itself . . . he . . . appreciates the dilemma of writing religious poetry in a thoroughly constructed and measured world . . . he best navigates between preying on, and praying to the sacred” (Kent Lewis, Canadian Literature).

“Keith goes beyond mere self-expression, aiming for an emotional resonance expressed in a technically accomplished manner; fortunately, he is usually able to achieve his goal” (Ronald Charles Epstein, CBRA).