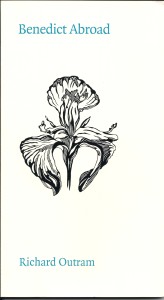 Richard Outram (1930-2005) was born in Port Hope but the family moved to Toronto and he attended high school in Leaside and then the University in Toronto, where he was influenced by Northrop Frye. He later worked at the CBC while writing and working in partnership with his wife, artist Barbara Howard, on publications printed for their private press, the Gauntlet Press. In addition, Outram published twelve collections of poetry.

Benedict Abroad was the first book of poetry to receive the Toronto Book Award (1999).

In Arc (Autumn 1999), Anna Adamek observed that Benedict Abroad is “difficult poetry” in which Outram maintains “very high intellectual and philosophical standards.” Following the eccentric characters in the search for “harmony and meaning,” however, is an “intellectual delight.”

“Outram’s work here is reminiscent of Hopkins’s for its linguistic density, its autodidactic terminology, its formal variety, and especially for its interest in the unique details of the material world . . . Outram’s attention and craft yields precise verbal renderings of physical objects, and ultimately is applied to the revelation of our little tastes and preferences, our own attention to detail that makes us—-both remarkably and ludicrously—-individuals” (Jason Camlot, Journal of Canadian Poetry). 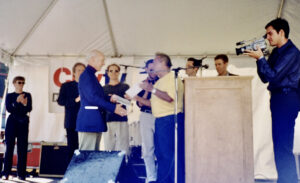