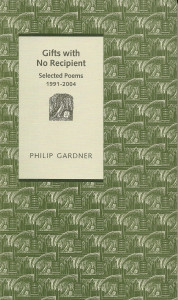 Philip Gardner was born in 1936 in Liverpool, England, and educated at King’s College, Cambridge, and the University of Liverpool. From 1964 until 2001 he taught at Memorial University of Newfoundland. He has published five collections of poetry together with academic studies (of Forster, Empson, and Housman). He lives in Ottawa with his wife Averil, both now retired from Memorial.

“Here is an excellent poet . . . Having read Gardner’s poetry over about a quarter of a century, I am fully convinced that he is the most technically proficient poet this country possesses. A few come close to him; none surpasses” (Richard Greene, National Post)

“In Gifts with No Recipients we have a diligent artist in verse-making and a deeply meditative poet whose work deserves to better known this side of the Big Pond” (Matt Simpson, stridemagazine UK

Philip is also a contributor to Anniversary Poems (2013).

Philip Gardner with former student, Richard Greene, at launch of Gifts with No Recipient (2006). 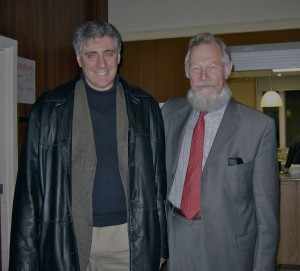