John Terpstra is a poet and non-fiction writer who lives and works as a carpenter and cabinetmaker in Hamilton, Ontario. He has published ten books of poetry and several works of non-fiction, including The Boys and Falling into Place. In addition to many readings at St. Thomas’s Church, he has published Devil’s Punch Bowl (1998) and In the Company of All (2016) in The St. Thomas Poetry Series as well as contributed to Anniversary Poems (2013) and two anthologies: Poetry and Spiritual Practice (2002) and Poetry as Liturgy (2007). 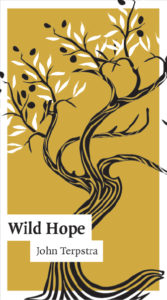 James A. K. Smith, Image Magazine: Praying (with a Poet)

You’ve likely heard me mention the Canadian poet, John Terpstra, before, most likely in a context where I was gushing about his remarkable little memoir, Skin Boat: Acts of Faith & Other Navigations, which rocked me and nourished me at a crucial point during the pandemic. (You can read an excerpt that was published in Image a while back.)

So I was delighted to read his latest collection of poems, Wild Hope, published in a gorgeous edition by the St. Thomas Poetry Series and available on their website.

Each poem began its life as a prayer. More specifically, the bulk of the poems were first crafted as Prayers of the People at St. Cuthbert’s Presbyterian Church in Hamilton, Ontario. For those not familiar, the Prayers of the People is a moment in historic Christian worship where the needs and concerns of the world—near and far—are brought before God as a priestly act of care for the world. It is a crucial moment of intersection of heaven and earth, echoing the Eucharist itself. To learn how to pray for the world is to learn how to love it as God does. In many ways, the significance of the Prayers of the People is about sanctifying our attention as much as pleading with God to act.

In Terpstra’s hands, prayer becomes an exercise in unvarnished honesty with God. That honesty is made possible by an intimacy one feels in the poetic register of these prayers. In other words, these poetic prayers remind you that the Psalms are poem prayers. To recover the poetic in our prayers is simply to apprentice ourselves once again to the Psalms. Sometimes the Spirit groans when we are without words; sometimes the same Spirit gives us a song to sing for the sake of the world.

Terpstra doesn’t shy from naming things—the horrors of war, the anxiety of climate change, the terrors of abuse, the failures of the church. But he prays, as the opening poem concludes, “while fasting on / the roots and berries of wild hope.” I commend the collection to you, perhaps for personal meditation—a poet giving you the words to pray when you can’t find any. But I also hope congregations and those who lead them in Prayers of the People might find in Terpstra’s examples a way to enliven our prayers with imagination.