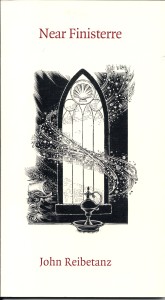 John Reibetanz (b. 1944) was born in New York City, studied at City University of New York and Princeton University and is now retired from Victoria College, University of Toronto. He has published more than ten books of poetry.

In a review of Near Finesterre published in Canadian Literature, Barbara Pell describes this “intricate and accomplished” collection as establishing the “complex connections between theology and the world.”

“Reibetanz is highly skilled poet whose work and influences are in many respects formalist. Reibetanz’s work is rich with echoes of the high modernists (Auden, Eliot, and Yeats) and yet is also rooted firmly in daily, present experience. He is one of perhaps only a handful of Canadian poets who know how to articulate convincingly the seriousness of life through the quiet intensity of poetic gestures” (Cynthia Messenger, Essays on Canadian Writing).

“Reibetanz is a poet and scholar who bears the armour of his learning with grace, and such a poem as ‘Prisoners of Conscience,’ though densely layered with glimpse and echo, rarely obscures the emotion of the moment or the singularity of an instance” (Klay Dyer, Journal of Canadian Poetry).

John also contributed to Poetry as Liturgy, Poems for an Anniversary, Poems for a Birthday, and Celebrating the 100th Birthday of William Blissett