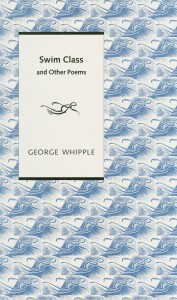 George Whipple was born in St. John, New Brunswick on May 24, 1927. He was the son of Bert and Mabel (née Maling) Whipple. With his brother Edward, he grew up in Toronto. He died in Burnaby, B.C. on May 29, 2014, aged 87. George Whipple attended Vancouver Teachers College in 1952, returned to Toronto and worked for more than 30 years as a postal clerk, then as a records clerk in the City Hall until 1984. He arrived back in B.C. in 1985, taking up residence in Burnaby. His first book gained lavish praise from Northrop Frye, Louis Dudek, and Gwendolyn MacEwen, among others. The cover of Fanfares, dedicated to Margaret Avison, is a self-portrait. “Critic and creator both,” he writes, “I sweat the fat from my poems by constant revision until they can dance in patterns more precise than speech, more true than reason.” In Whipple’s tenth book of poems, Kites, divided into six sections — In the Beginning; The Changing World; The Flesh; Poetry; Kites and Obsequies — the poet invokes childhood wonder, the inner life of animals, forms of earthly passion and the wry experience of advancing age. Volume I of his collected poems is Tom Thomson and Other Poems. Volume II is The Colour of Memory. His papers and other works are archived in the Thomas Fisher Rare Book Library, University of Toronto.  (BC Booklook, 2014) 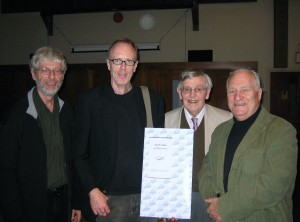 John Terpstra, Barry Dempster, W. J. Keith, and John Robert Colombo each read from Swim Class when the book was launched at St. Thomas’s on 7 November 2008.