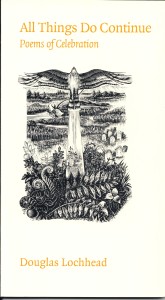 Douglas Lochhead died 15 March 2011 at the age of 88. Author of a dozen and a half volumes of poetry, he lived latterly in Sackville, New Brunswick. Born in Guelph, Ontario, he would become University Librarian at Dalhousie (1953-1960), Director of Libraries at York University (1960-1963), and then founding librarian of Massey College, University of Toronto (1963-1975). He subsequently taught for many years at Acadia University (1975-1987) as Director of Canadian Studies and became Professor Emeritus after his retirement. In 2002 he became the first Poet Laureate for Sackville, N.B.

Alan Brown describes Lochhead’s sixteenth collection of poetry as combining “academic precision” with “the casualness of a man at ease in his words.” The poems “go their own ways and to their own places.”

“Lochhead chooses to affirm that ‘all things do continue’ in his wonderful poems of celebration . . . The whole sequence can be read as a poignant and extended meditation on Psalm 19, in which all of creation ‘declares’ the glory of God and points to his real presence. The poet’s words, uttered in haunting cadences, reflect the same language of praise used by the psalmist” (Dominic Manganiello, Journal of Canadian Poetry).