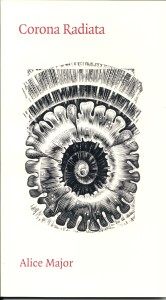 Alice Major was born in Scotland and grew up in Scarborough, Ontario. She went west as a journalist and now lives and works in Edmonton, Alberta, where she is the former Poet Laureate. She has also been active in the League for Canadian Poets and, among other positions, served a term as President.

“Corona Radiata is a meditation on the development of an embryo into a human being. It is structured in nine sections, each corresponding to a different part of the developing fetus and to a different kind of journey . . . In writing this sequence, I found a voice clearing a space for it in my mind. The voice is partly that of the developing child, partly that of the world waiting to receive her—-a synthesis of the world that is creating her, and the child who is creating a world” (Alice Major).

“An astute reader with take up the challenge, devour the imagery, and chart the journey each individual makes. The poet is a new Eve, naming the beautiful beasts of Paradise (‘Invention’). Old and new creatures represent ‘life in an eternal present and the fresh new consciousness / of time’ (‘Land Bridge’). the poet, like the child, will construct vision ‘from shapes her brain already knows, / from the shadows it casts on light’ (‘Fire)” (Anne Burke, League of Canadian Poets website).

Jeffrey Donaldson (University of Toronto Quarterly, “Letters in Canada,” 2000) observes how the collection is “closely attuned to the sumptuousness of the physical world” and how her poetry reminds us of Hopkins’s.