Skip to Main Content
“Favourites and Requests”
On Saturday, 9 November 2019 at 7:30 in the parish hall three poets read their favourite religious poems and then read poems sent in for reading by audience members as their ‘favourites.’ Among the poets chosen were George Herbert, Gerard Manley Hopkins, Peter Levi, Christian Wiman, Dennis Lee, Elizabeth Bishop, R. S. Thomas, and many others.
Our readers were John Reibetanz, who is author of a dozen books of poetry, who has published widely in Canada and beyond, and who is now retired from the Dept. of English at Victoria College; John Porter of Hamilton, who has a special interest in Thomas Merton, who has written several books, and who is a frequent contributor to Hamilton literary publications; and Richard Greene, who directs the MA in Creative Writing at the University of Toronto, whose Boxing the Compass (2009) received the Governor General’s Award for Poetry, and whose biography of Graham Greene is forthcoming next year.
We acknowledge the support of the Canada Council for the Arts and The League of Canadian Poets. 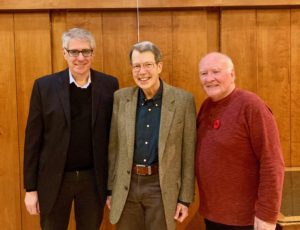